Looking at Financial Fair Play Through the Lens of Real Madrid


Looking at Financial Fair Play Through the Lens of Real Madrid

Once upon a time, shopping sprees in soccer were the standard. As every shop-aholic knows, sometimes, spending can get out of control. Picture this: a young man walks into his favorite high-fashion clothing store. His eyes light up at the merchandise and his budget is left at the door. He picks out several outfits, accessories, and shoes that well exceed what he can afford. How can he possibly walk away with this apparel? Well, let’s examine a few scenarios.

Relatably, these are some scenarios we akin to Real Madrid as they continue their expensive summer. The aim of this article is to analyze Real Madrid's prospects this summer of signing numerous marquee players for the 2019-20 season despite the implementation of Financial Fair Play (“FFP”) regulations. Along the way, the important aspects of Financial Fair Play will be explained, giving a better perspective on UEFA’s decision-making and policy.

What you need to know about Financial Fair Play

In hopes of improving the economic and financial stability of European clubs, UEFA has made consumerist-type clubs more accountable for their occasionally impulsive spending habits through Financial Fair Play regulations.

Financial Fair Play has two dimensions. One, clubs must be solvent, meaning they must pay their debts. You can imagine how dangerous it is to do business with a company who is insolvent. Put simply, when a company cannot pay their debts, or when the creditors do not agree to write off the company’s debt, the company’s assets are sold to pay creditors to the greatest extent and the business ceases to exist.

The second dimension of FFP is the breakeven rule. This breakeven rule requires that clubs, over a three year “monitoring period,” must have their revenue match their expenses. Basically, clubs can spend what they earn. However, even this portion can be misleading. The breakeven rule only examines what UEFA has determined to be “relevant income” and “relevant expenses.” Also, not exactly coinciding with the “breakeven” name, UEFA allows clubs to accrue up to €5mm in financial losses with the ability of owners/shareholders to cover an excess €30mm to prevent the debts from being uncontrollable.

During this time, UEFA will examine each club’s breakeven analysis, which outlines the “relevant income” and “relevant expenses.” It would help to understand the items that go into these vague titles.

The most pertinent forms of “relevant income” come in revenue generated from:

These, among other things, add up to the amount of money a club brings in. For the most part, these things are fairly self-explanatory. Nuances come in with regard to “commercial activities,” for example, that include revenue derived from merchandising and food & beverage sales as well as profits made on transferred players, which are not usually reported in revenues. Also the majority of teams, especially large-market ones, have most “relevant income” sourced from commercial activities and broadcasting rights.

Income’s counterpart, expenses, come in the form of:

It is worth mentioning here, the items NOT included in relevant expenses for the sake of the breakeven analysis. In order to promote investment in stadiums, training facilities, youth development, and women’s soccer, all such costs are excluded from the break-even calculation.

For more detail as to what goes into these categories, as well as some more unpopular accounting nuances, please visit UEFA’s FFP regulations.

It is important to note that these numbers do not include player transfers. Without accounting for the transfers, so far, Real Madrid looks safely afloat the breakeven analysis by actually turning a profit for 2 years in the monitoring period. Going into 2019, that total profit without including player transfers amounts to €52.6mm profit for the club. Not bad. Unfortunately, we do not have any data on revenues/costs for 2019, as the year has yet to finish.

Now let’s take a look at the transfer picture to get a better understanding of the club’s financial health. All “Transfer Sum” numbers are sourced from Transfer Markt. 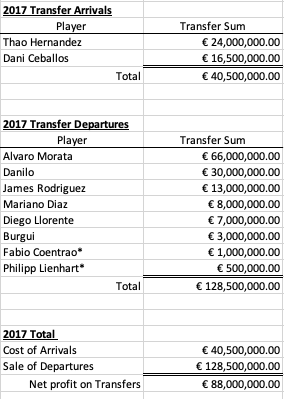 Players with a * after their name indicate a loan fee earned by the club.

In 2017, the club turned a profit of €88mm on their transfer market. Key sales of Alvaro Morata and Danilo led the way to account for the majority of the transfer sums. To keep a rough running tab of our own breakeven analysis,

This represents Real Madrid’s earnings from 2017 and 2018 operational profits plus the net gain from 2017 transfers. The next step is to look at the 2018 transfer window. 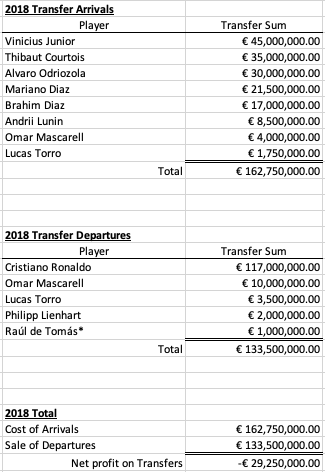 Players with a * after their name indicate a loan fee earned by the club.

Despite offloading Cristiano Ronaldo for a massive gain, Real found themselves in a €29mm hole as their acquisitions outpaced their departures.

Keeping up with our tab,

The only data that has been released on the 2019 season is data on the transfers signed thus far. So, while much is left to speculation, we are going to make some assumptions about Real Madrid and how they might handle their situation. 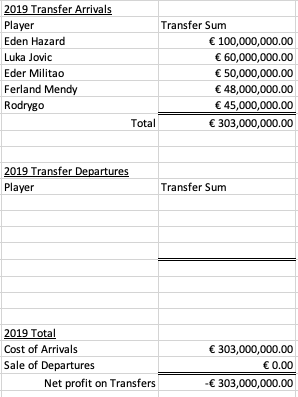 Yikes. As we have seen, Real Madrid’s spending this summer has them digging DEEP into their pockets. With Zizou back as the gaffer, he has shown that the club he won with just two years ago, no longer has the caliber of player he demands. With just examining the finances of the club, we again turn to our running tab. Once in the black €111mm, we now see that surplus erased.

With much of the summer transfer window left, Florentino Perez and Real Madrid will seek to dig themselves out of almost a €200mm hole.

Remember, the number to shoot for is -€35mm because FFP allows the owner of the club to cover up to €30mm of debt to be within the €5mm acceptable deficit.

Also, Real Madrid has not offloaded any of the players on their current roster. This is almost guaranteed to happen before the summer is over. There is a ton of speculation surrounding who may go, with Bale, James, and Kovacic leading the rumor report. There are also other players that may make sense to let go of, especially with talks of Real’s spending not being over.

Here is a list. All “Transfer Sum” numbers are sourced from Transfer Markt. 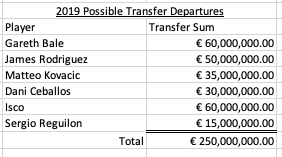 These estimates are conservative considering Real has reportedly attached an €80mm tag to Bale, as well as a €50mm tag to Kovacic. Regardless of what the club wants for any individual player, the bottom line is that they may find themselves with less bargaining power than normal, and selling for less than their ideal price.

As you can see, if they were to sell every player listed, they are back in a surplus by a comfortable margin. (Approximately €100mm or closer to €140mm with Florentino Perez able to cover some debt).

With rumors circulating about purchases of Mbappe, Pogba, Eriksen, or Neymar, this analysis verifies that this is a legitimate possibility for Los Blancos without violating FFP.

Going back to the situations mentioned earlier with respect to our shop-aholic, let’s relate them to Real Madrid.

Here, this would require a lot of ignorance on behalf of Real Madrid. With their current €192mm debt for the current monitoring period, they would have to sell zero players and simply rely on the revenue generated by the club, which will certainly fall short of €192mm to stay well below the deficit.

What happens if a club is found to have violated FFP?

The creditors in this situation are FFP external auditors, the Club Financial Control Body (“CFCB”), which has several disciplinary powers. Per UEFA, some repercussions a club can face include:

e) withholding of revenues from a UEFA competition

g) restriction on the number of players that a club may register for participation in UEFA competitions, including a financial limit on the overall aggregate cost of the employee benefits expenses of players registered on the A-list for the purposes of UEFA club competitions

i) withdrawal of a title or award

UEFA has also assured clubs that in order to best effectuate FFP rules, the CFCB prefers a rehabilitative approach rather than a punitive one. This has led and will likely continue to lead to settlement agreements between UEFA and clubs for first time offenders. We have yet to see repeat FFP offenders, but UEFA reserves the right to place heavy sanctions on clubs who are slow to comply.

This is the most relatable situation for Real. Their spending habits this summer have certainly left them with some work to do, but they already have a significant other, Florentino Perez, ready and willing to pick up any slack left behind.

Just to give an idea of what this would look like, Real could sell Bale, James, Kovacic, and Reguilon for their market value. This would amount to €160mm in money coming in, which would leave the deficit at about €32mm. Again, this would be all the work that Real would have to do, with the rest being covered by their ready, willing, and able sugar daddy: Florentino Perez.

This scenario looked plausible prior to 2019. Real had accumulated a €110mm surplus to play with. However, after a lackluster season, Real promised an overhaul of the team, and delivered just that. After being diligent savers, the club got the itch to spend and have already vaporized whatever surplus existed as well as their ability to pay it off without further action.

With about 6 months left in 2019, there are many variables that still could impact Real Madrid’s FFP landscape. As new details and signings emerge, use this article as a blueprint to evaluate what else Los Blancos need to think about accomplishing to comply with UEFA’s rules.

There are a few important takeaways worth repeating. First, clubs need to balance their books over a monitoring period, not for one year. Second, you have not heard about heavy sanctions on teams, YET. This is because FFP is a relatively new instrument for UEFA to address some of the financial instability concerns in soccer. Repeat offenders have yet to be seen. Also, as mentioned earlier, the CFCB will aim to help clubs before harming them, meaning private settlements will be reached before public sanctions delivered.

Finally, pertaining to Real Madrid, it is almost certain they will sell some of their top tier players. This would mean that it is possible we see another Hazard-caliber player joining the squad. My prediction: Paul Pogba will be kissing the patch at Bernabeu before the summer is over.

You may also Interest in...

Endorsements, Sponsorships, and Advertisements: NFL vs NBA vs MLS (87)
Sabba_k | 24 Dec, 2019
The collective bargaining agreement is a contract that is found across all major league sports. The negotiation takes place between the organization and the player’s union to define a strategic way to respond and communicate the rules and regul ... Read More

CBA Comparison - Meal Allowances in the NBA, NFL and NHL (262)
amber_sporer | 25 Sep, 2019
There is no denying the fact that athletes tend to have expensive taste, especially veterans who have been playing in their league for many years and receive higher salaries. Curious minds may inquiry about how these expensive tastes translate into i ... Read More

CBA Comparison (226)
WTHwithyouraccountname | 25 Sep, 2019
CBA Comparison The Collective Bargaining Arbitration is different sports league has lots of common terms. I chose several things I feel very interesting to compare them in the different leagues. The first one is the salary cap. Can superstar playe ... Read More

Salary Caps in Major Sports Leagues (122)
aj2894 | 25 Sep, 2019
Collective bargaining agreements in the major sports league in the United States of America are basically the list of agreements that are reached between the particular league’s owners and the league’s professional players. Ther ... Read More